Hell away from home

The perils of sandwich ordering
Next

Or… the story of the doorless bathroom

We’ve all done it: gone to spend a weekend with family or friends. It sounds a good idea at the time – it always does, but eventually reality will surely strike even if the hosts are my wife’s cousins.

The welcome is warm enough: Come in! Sit down! Have a cup of tea! Some hot scones, perhaps – or something stronger?

The first few hours pass by very quickly. Friendships are renewed and good times that have been missed are recounted. Did little Freddie really pass Woodwork and French Oral? Of course the lazy little blighter should have done; he failed everything last time and he’s not getting any younger.

Then suddenly it’s bedtime. You refuse the offer of help with your luggage up two flights of barely lit stairs with no handrail, fall over the damned dog for the umpteenth time and finally, with pounding heart, you are shown into the guest room.

The pleasantries said, the door finally closes and, exhausted, you collapse on the bed and begin to take stock of your surroundings. The bed seems too soft and what’s more it, very handily, rolls you towards the side of the mattress and, potentially, right out of bed but you don’t care, you’re so tired you can easily deal with that.

Your better half announces that she’ll just use the bathroom and then unpack. “There’s no door on the bathroom”, she cries suddenly, “and there are no blooming towels in there either!”

“I’ll go and ask Jeremy,” I offer, and I open the bedroom door at the same time gently pulling the brass 17th century handle right off its spindle which, of course, falls softly onto the carpet on the other side of the door.

“Well, we’re locked in and I bet they’ve all gone to sleep by now anyway,” I comment weakly, “let’s unpack and put our things away so we’ll be as right as rain in the morning.” That statement was rapidly to prove unduly optimistic as my wife then opened the wardrobe to find no hangers and no hanging space and, to add insult to injury, no empty drawers in which to stow our things.

Slowly the enormity of the bathroom door – or rather, its absence, began to dawn on us. We’ve been married for more years than I can count and we’re no prudes but we do both value our private space on certain occasions.

Suffice it to say and without going into detail that we eventually found what is known in the IT world as a work-around which was far from ideal but overcame the problem for the time being.

Apart from a handle that came away from its appurtenant bathroom tap, everything then started to go surprisingly swimmingly until we got into bed only to find that there were no bedside lights so we argued volubly about who should get out into the cold winter air and turn off the ceiling light that could have illuminated half of a decent sized village.

Of course I lost that argument.

We tried to sleep but our efforts were interrupted by my loud expression of the thought that, “We’ve only got two more nights of this,” I shouted from my semi-drowsy state, “shall we make up an excuse and go home tomorrow? I’d rather redecorate our dining room than go through all of this again!”

The next day we were eventually released from our overnight cell after much banging and shouting and we joined our hosts in genial conversation over breakfast. Someone among our hosts had obviously heard my involuntary nocturnal exclamation and asked if everything was alright in our room. I took a deep breath and winced as my wife’s shoes caught my left shin bone. “Everything’s fine,“ I volunteered and then added bravely “I was just wondering what happened to the bathroom door.”

Jeremy cackled with laughter. “Oh I’m sorry about that. If you don’t like the present arrangement, we can lend you one of those folding screen things to put in front of the opening. That should do the trick, shouldn’t it?”

Our dining room has been beautifully redecorated and I’m going to start next on the guest room and its very private ensuite bathroom. When it’s finished we’ll sleep in it for a few nights just to make sure that my wife’s cousins will be truly comfortable when they come to visit us for Easter. I think I’ll even put a few new magazines, a bowl of fruit and some freshly cut flowers in the room for them. 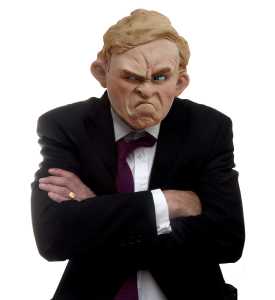 Consider yourself at times a “grumpy man/woman”? Send us your grumble and we may post it here.

By GrumpyPublished On: September 13, 2017Categories: Grumble Of The Month1 CommentTags: family, friends, relatives

About the Author: Grumpy

Grumpy is a fictional character, but we are certain that he's very recognizable. There's a little bit of Grumpy in all of us!

The perils of sandwich ordering