Frogs in a French restaurant

Home/Lifestyle/Life/Frogs in a French restaurant
Previous

Don't even ask!
Next

Protestors must be prepared to bear the consequences of their actions

Bangkok flooding is business as usual

I was sitting in a vibrant French restaurant in central Bangkok thinking about nothing in particular and, I’m sad to say, gazing absent-mindedly at the rather attractive floor tiles without actually focusing on them.

It was then that I noticed all was not as well as I assumed.  Water was coming across the floor at a very fast rate which, although nothing by Tsunami standards, was sufficient to convince me that I had to take action pretty soon.

My lunch partner had gone to inspect the magnificent cheese trolley and had become engrossed in it not having noticed the impending flood that had been caused by a sudden very heavy downpour of a kind that is quite normal during the monsoon season.  She is inordinately obsessed with her handbags so, cursing under my breath, my first duty was to rescue her latest purchase from an early and soggy consignment to the garbage.

Once that had been achieved I put my feet on the stand under the table and waited for her to bring back the cheese which was as good as it looked.

I had not realised there are so many French businessmen in Bangkok.  They were all doing the things french people do in restaurants: talking, eating, and drinking, all with gusto.  Occasionally, one or two of them looked down at the floor, by now ankle deep in thankfully good clear water.  Just imagine if the local sewer had been breached.

The unasked question was, of course, the important one: “Are you going to do anything about it then?”  The answer was only to be known much later.

Apart from the presence of the water, everything carried on as normal.  Only one table moved to higher ground.  Nobody left in a panic or a fit of pique.  Everyone was there to have lunch and they were going to enjoy it.

After and hour and a half or so, businessmen looked at their watches and made discrete calls to their offices.  How to leave the restaurant and remain acceptably dressed for the afternoon’s affairs became the main preoccupation.

Now the answer to the unanswered question finally became apparent.  Staff issued patrons with small plastic bags for those who wished to leave with their trousers rolled up while carrying their shoes and socks, and big garbage bags for those too lazy or too proud to take off their shoes and socks in public.  No, these people would leave with a garbage bag on each leg as a makeshift gumboot. 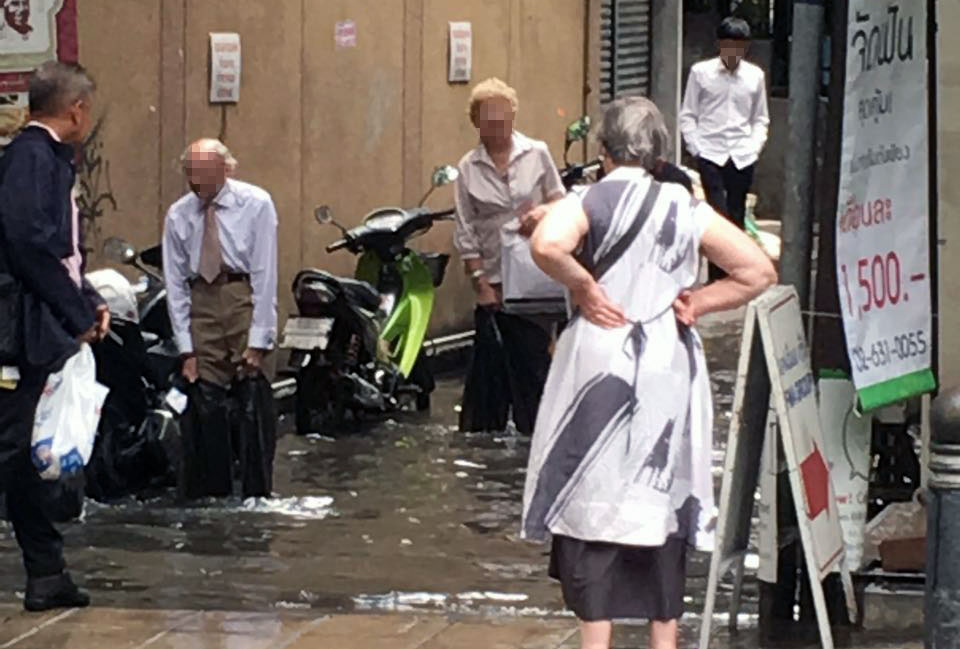 I had texted a colleague in Australia to tell him of our predicament.  Assuming a somewhat colonial stance, he advised sending out for some gumboots.  Now I know Bangkok fairly well and I challenge anyone to tell me the location of a store anywhere in Greater Bangkok that sells such things.  People just don’t wear them.  “Ask Siri,” suggested my partner from behind a mocking smile of thinly-veiled delight.  Siri and I have a very tense relationship at the best of times so I decided not to pursue this suggestion.

We opted for the small plastic bag option and gingerly waded out of the restaurant into the even more deeply flooded lane that would take us to the high ground.  Here we witnessed the amazing kindness inherent in many of the Thai people in the form of one broadly smiling man who helped us in every way he could.  Once on dry land I reached for my wallet to give him a token of my appreciation, but when I looked up he had gone, and I hadn’t even had a chance to thank him.

I am now the proud owner of a pair of gumboots, courtesy of online shopping.

Protestors must be prepared to bear the consequences of their actions