Trainee "Grey Nomads" head for the outback
Next

We drove through the early morning drizzle to St George, about three hours away. The road was noticeably quieter than on any of our previous trips with only occasional road trains, local farmers in their utes or fellow caravan travellers to wave to, as they passed us by. Was it our imagination, or did there appear to be at least double the number of vehicles heading in the opposite direction to us?

Eventually, the traffic became so light we might only see another vehicle once every 15 or 20 minutes. In 40 years of driving I can’t recall many occasions when a road was so quiet – and this one was called the Carnarvon Highway. The dirt roads that intersected with it and headed off, arrow straight at right angles from the Highway, looked like they might wait several months to host a driver travelling from ‘nowhere-in-particular’ to ‘nowhere-I’ve-ever-heard-of’.

I found myself muttering to the car “please don’t breakdown”.

About 45 km before St George, we made a slight detour to see the Nindigully Pub. 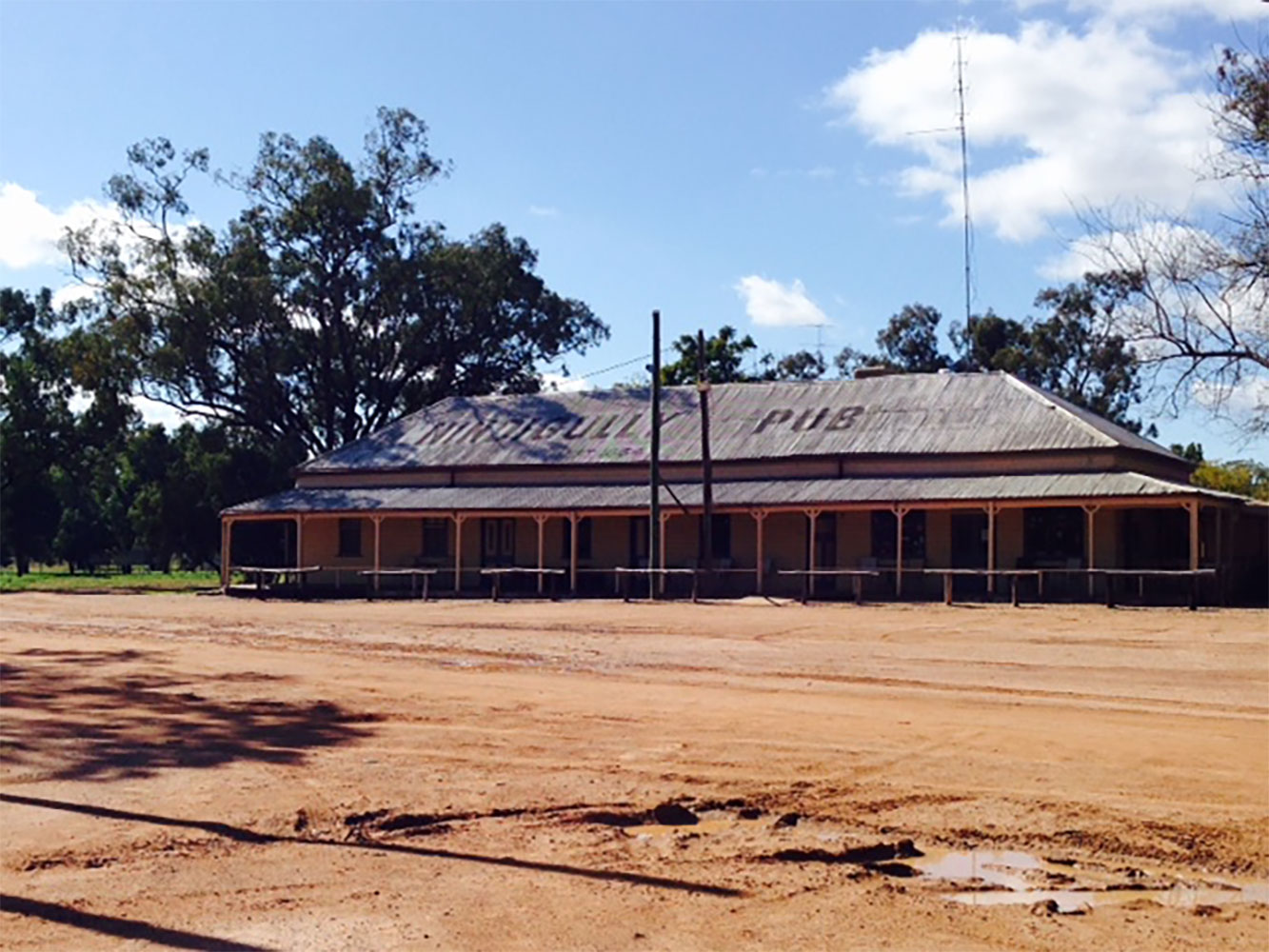 Established in 1864 it is not only Queensland oldest continually licensed pub, it is also where they make Australia’s biggest hamburgers including the ‘Road Train Burger’ a mere snack of 5 kilos, right up to the ‘Road Hog Burger’ that weighs in at a magnificent 14 kilos.

We decided to give the burgers a miss on this occasion.

Neil, the caravan park owner, greeted us at our next stop and what a thoroughly welcoming and friendly man he was. Neil was a typical elderly Australian country gentleman, resplendent in his big sand-coloured Akubra hat.

I imagine it was probably the first thing he donned in the morning and the last thing he removed at night, for the time in between, it remained slapped tightly to his well-lined and sun-spotted head. He was so ‘country’ he looked like he had been grown in the red soil that surrounded the town.

After parking up, we drove into the town to get some cash, fill up on petrol and call into the local IGA supermarket.

We then drove to the outskirts of town, along the southern bank of the Balonne River to visit the cellar door of Queensland most westerly vineyard, Riverside Wines.

It was rustic, charming and as you walked through the rickety front door, it felt like you were walking into your Granddad’s old potting shed down the bottom of the garden.

We were greeted by Ida with the usual “How are you going”? Followed by the not so usual “Would you like to taste some wine”? Too right we would thank you, and we sidled up to a vacant small side bar with a couple of clean, empty glasses on top and two high stools.

Ida was lovely. Like a favourite Aunty who didn’t get offended by the odd swear word and had the type of skin that announced “we didn’t have factor 30 when I was a girl”.

As with many of the country Australian folk we had encountered, she had the uncanny ability to make her guests feel completely welcome and relaxed. The easy banter that cushioned her metronome-like return every few minutes with yet another bottle to sample, quickly established that not only did her son live but 10 minutes walk from our most recent apartment in Sydney, but that he also drank at one of the few pubs in the city that we used to frequent.

Small world. I dare say we would have recognised him had he walked in carrying a crate of Chardonnay to restock the shelves.

It transpired that winter is the busy season for the vineyard in terms of making money, as their wines were mainly sold from the cellar door to visitors like us. Summers are too hot to attract the tourists. Not for the first time I began to appreciate just how important travellers are to small rural towns like St George.

Some of the wine was pretty good. We bought three bottles of Chardonnay; two bottles of Merlot and a Tawny Port all of which were terrific and good value at $22 a bottle. Edith also bought a jar of grape chutney called ‘spicy liaison’ (a strange name, but it worked well with the Chicken Madras we made for dinner).

The next morning we were looking forward to a lazy day but first we had to earn it by doing a few chores.

When we visited the IGA supermarket the day before, Edith had spied an array of interesting local shops that might yield some as yet unknown but, to Edith, completely essential, items that we had so far failed to acquire for the trip. I can well appreciate her excitement at the prospect of finding that kitchen utensil or accessory that would make our lives complete.

Perhaps that’s one of the differences between men and women when it comes to shopping. When I need a new pair of shoes I go to a shoe shop and invariably buy a pair. When Edith goes to the shops, the experience is more akin to a treasure hunt that might unearth all manner of desirable outcomes “We don’t need another set of pillowcases, but these were on a two for one offer” or “I was actually looking for a new handbag but I found this lovely egg timer instead”.

The thought of me following Edith around the local shops did not fill me with joy so I suggested a compromise. “Why don’t we drive into town and park at the local bakery? I’ll sit and do my emails and catch up on my diary and you can look around the shops? Take as long as you like, I’ll be fine”.

These types of suggestions are of course the secret to a long and happy marriage. It’s called compromising – and as Edith always agrees, “that’s what my husband does.”

I dropped Edith off at the end of the main street and I drove to the Bakery about three blocks down.

I ordered a large coffee and had just taken the froth off it when Edith plonked herself in the seat next to me. “What are you doing here? I thought you would be ages yet” I complained, “It’s Saturday, this is a small country town and the shops are all shut”.

No so much of a ‘treasure hunt’ today then, more a ‘today’s fun has been cancelled at short notice’ hunt.

“I know, let’s go back to the winery and stock up on a few bottles of that Chardonnay that you really liked.” This represented a poor alternative to the discovery of the Lost Ark of the Covenant, the Holy Grail or a missing Da Vinci masterpiece that might, however unlikely, have been unearthed in Vinnie’s (St Vincent’s) charity shop, but it was the best I could do.

We drove back to Riversands Vineyard and I popped in to see the lovely Ida again. There she was in the Potting Shed along with a very perky young Asian girl. 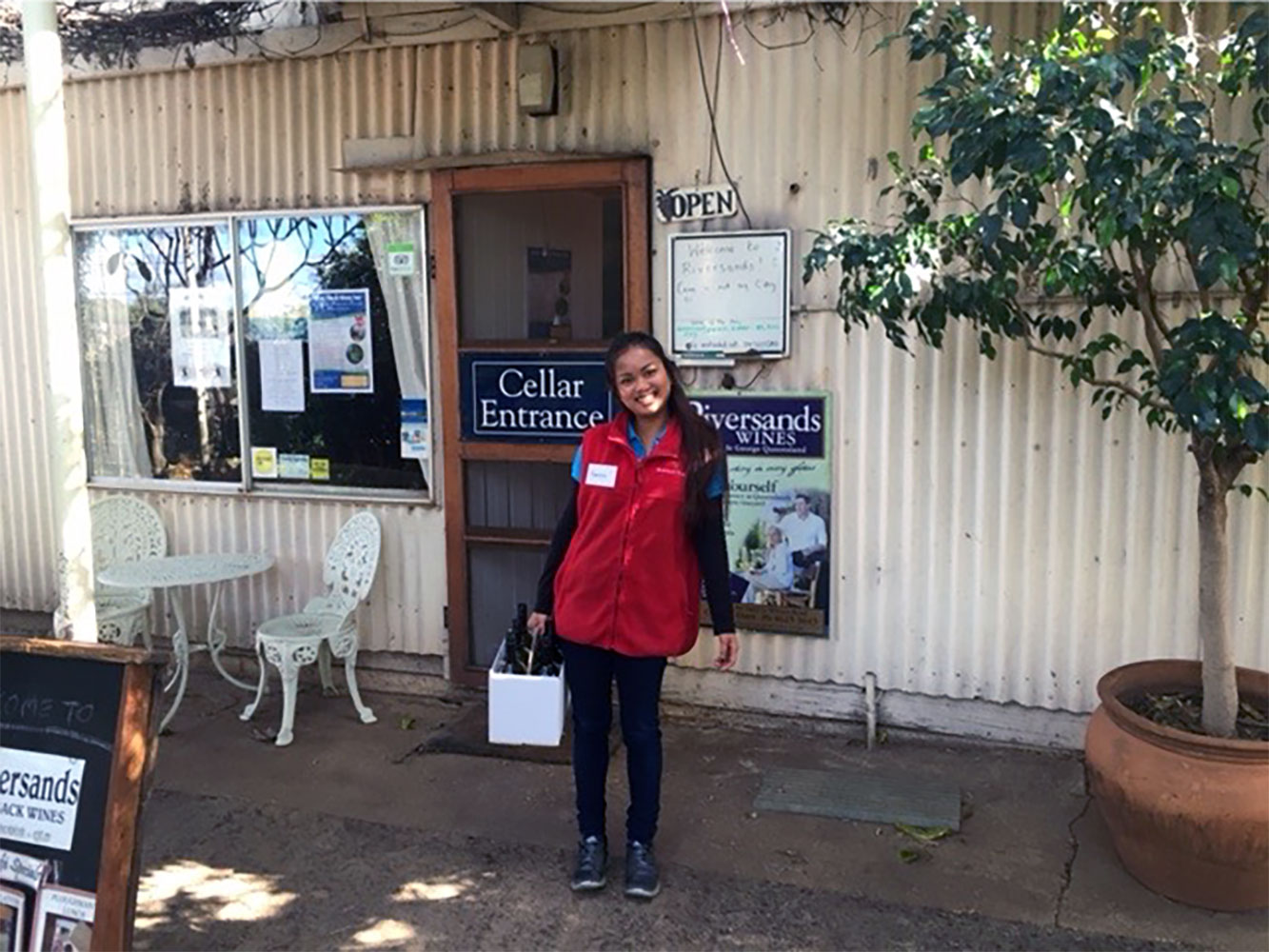 “Hello again” she said as I walked in. Nice to be recognised, I thought. I paid for six bottles and asked if I could take her photograph. “Absolutely not” she refused. “I hate having my photo taken. Vanessa, you go outside and have your photo taken”. So she did, and very photogenic she turned out to be.

About the Author: Bob B.

Bob Bell and his wife Edith are two Brits travelling through the great Outback of Australia. Whilst on their journey, they have agreed to become guest writers and keep us updated of their travel experiences through the land of Oz. Bob is a Guest Contributor of The Silver Life.